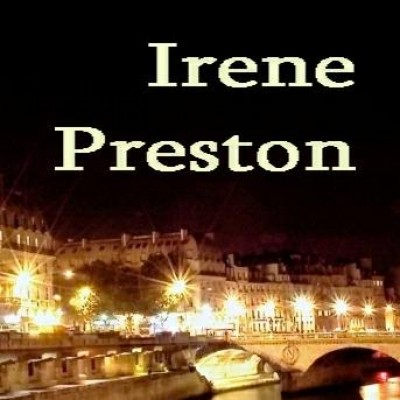 Irene Preston has to write romances, after all she is living one. As a starving college student, she met her dream man who whisked her away on a romantic honeymoon across Europe. Today they live in the beautiful hill country outside of Austin, Texas where Dream Man is still working hard to make sure she never has to take off her rose-colored glasses.

Irene's newsletter subscribers never miss a sale, release or giveaway.
Copy this link into your browser to visit her sign-up:
http://bit.ly/1ic47GP

For generations, the White Monks have treated the vampire Thaddeus Dupont as a weapon in their battle against demons. However, when a prominent matron drops dead at a party, Thaddeus and his lover Sarasija are asked to find her killer. Their investigation leads them to an old southern family with connections everywhere: Louisiana politics, big business, the Church, and an organization just as secret as the White Monks.

Meanwhile, an esoteric text containing spells for demon-summoning has disappeared, Thaddeus is losing control of le monstre, and Sara is troubled by disturbing dreams. As the nights wear on, Sara fears they are a manifestation of a dark secret that could destroy his relationship with Thaddeums

Thaddeus Dupont has had over eighty years to forget...


The vampire spends his nights chanting the Liturgy of the Hours and ruthlessly disciplines those unnatural urges he's vowed never again to indulge. He is at the command of the White Monks, who summon him at will to destroy demons. In return, the monks provide for his sustenance and promise the return of his immortal soul.


When a hiring mix-up sends him Sarasija, a young male assistant, the vampire's resolve is tested as never before. After yielding to temptation, Thaddeus must make a choice. Killing demons may save his soul, but keeping the faith will cost him his heart.

A Taste of You Preview

Hell's Kitchen has nothing on the flames Giancarlo and Garrett ignite at Restaurant Ransom...

Garrett Ransom is America's hot chef du jour. He has a Michelin-starred restaurant in New York City, a hit reality TV show, and a new man in his bed every week. Yes, he secretly thinks his business partner, Giancarlo "Carlo" Rotolo, is hotter than a ghost pepper, but he would never jeopardize their friendship with a fling.

Giancarlo's been in love with Garrett forever. He's sure Garrett will eventually realize they are destined to be more than business partners. But when Garrett installs his latest boyfriend as their new chef d'cuisine and announces plans to leave Carlo in New York while he opens a second restaurant on the west coast, Carlo is forced to re-evaluate his life.